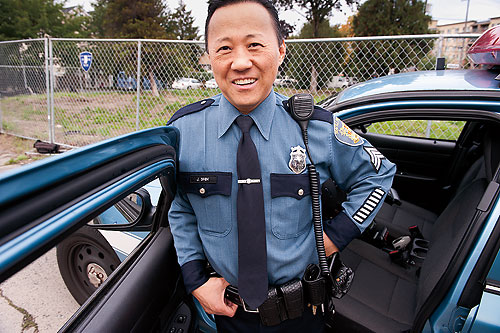 I’ve been in patrol pretty much my whole career, by choice.  I believe patrol is the backbone of any major police department.  It’s the place where most of the critical incidents and actions take place.  You never know from one day to the next what might unfold.  I’ve always liked that.

I’ve known since seventh grade that police work was the very thing I wanted to do.  Something about it drew my interest.  I think it just fit my personality.  There are people, when confronted with an unknown, chaotic emergency, who tend to keep away from it.  I can’t really blame them.  On the flip side, there are those who choose to run right into it.  I guess I’m one of those that go right into it.  I think I’m just wired that way.

When you get feedback from citizens thanking you, that goes a long way.  What’s really been one of the most meaningful and rewarding parts to this work is when I receive letters from citizens directly expressing their appreciation or gratitude for some small part I may have had in their lives at that particular time.

In fact, within the last 23 years, the only thing I’ve ever personally kept in my file that means anything are the letters of commendation I get from citizens.  Those mean more to me than any recognition I might receive from within the department.  When citizens actually take the time to write a letter about what took place, what happened and how they’re appreciative of how it was handled, that’s the most rewarding.

Because of human nature, people do wrong things and there are victims.  We have to have some measure of order and justice in our society where something comes into play that evens the odds, or makes it right, so to speak.  That’s why I was drawn to this work and that’s why I’m still here.