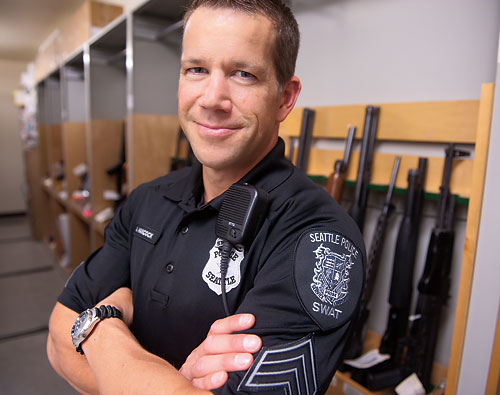 When I was sergeant of the mountain bike squad, my bike guys were arresting drug dealers downtown all the time.  I made sure to talk to almost everyone they’d arrest.  “What’s your story?  Where are you coming from?  Why are you doing this?”  I thought, if I grew up in the same circumstances with the same influences as this person, would I be in the same place?  I very much could be.  I just took an extra step.  At the same time I’m telling them, “Don’t ever come down here again.”

Some of them struck a cord, this one gal in particular.  She had a new baby girl.  Her parents were both crack dealers and crack addicts.  That was the life she grew up in.  She was 20 years old.  She didn’t have an education.  It was her only way to get money.  I listened to her and went through the whole talk.  She’s crying and I said, “If you really want help, if you really want a shot, I will help you.  I’m going to give you my cell phone number and you call me.  You’re going to be out of jail tomorrow or the next day.  You get out of jail and you call me and I will help.”

Sure enough, three days later she called me and still wanted help.  I met her, talked with her, got her whole story and I put her in touch with the right folks.  She ended up getting her GED.  Got a job, lost that job.  Got another job, lost that job.  We’re still working with her, but it’s been at least three years now, I’ll bet.  I put her in touch with contacts that are a support group because she had zero family support whatsoever.  She’s super appreciative, super nice.  Every time I see her she gives me a big hug.  It just took this much of a step to help her out, but that’s all she really needed was that opportunity.  All I did was open the door for her that much and she stepped through.  It was good to do that for somebody.