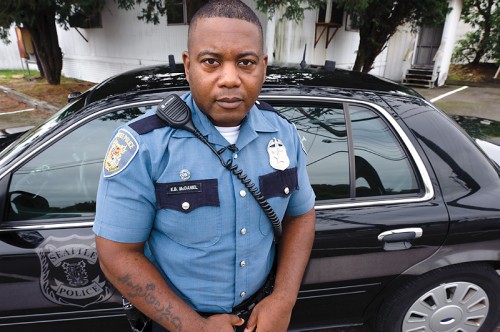 You’re dealing with the unknown every day as far as patrol is concerned.  Many times, we don’t have the opportunity to plan.  We get a call and the time we get to plan is on the way.  You never know.  Something small can turn to a very dangerous situation.

We run toward shots fired when the normal person would run away.  We do the total opposite of what a normal person would do.  I think that this job is a calling for most of us. Not everyone can do this job.   We are in the business of helping people. I can’t explain why I would chase a guy into a dark alley or why I would kick in a door knowing there is someone that’s armed inside the house.  It’s instincts and I think that it’s just wanting to help people, people who are in need of our help.

We’re held to a higher standard, understandably so.  The worst part for me is that people really don’t get to see what police officers do on a daily basis.  I’ll give you an example.  Myself and a couple of other officers went to a house one time. It was a CPS (Child Protective Services) call where someone in the neighborhood was concerned for the kids’ welfare.  The lady had four kids.  The kids were not abused.  The woman said, “I don’t have a lot of money.  I buy what I can for my kids.”  We looked in her refrigerator.  She had very little food.  The kids had very little clothing.

The officers and I go out to talk to each other.  One says, “Why don’t I go to Target.”  Another says, “I’ll go to QFC to pick up food.”  So we take food and clothes to the house for the lady.  She was very happy.  She cried.  She was thanking us and giving us all hugs.  We’re not always out here writing tickets and telling people what to do.  We do good things every day that people don’t see or realize.