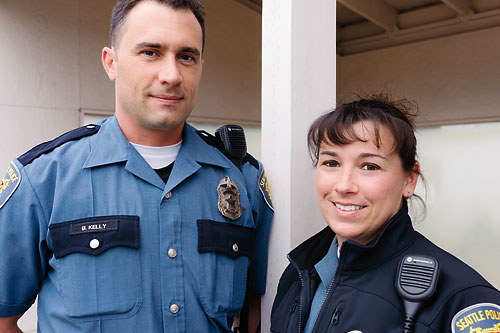 Did you realize Officer Brenton had been shot?

Initially, I didn’t know about Tim.  I radioed in the car that shots had been fired.  I got out of the car.  I was looking through the V watching him [the shooter] drive off.  I returned fire.  It was at that point I thought, why isn’t Tim helping me?  Why isn’t he out here?  So I looked into the vehicle.  I don’t know if my memory won’t let me keep the visual, but I knew he was dead at that point.

It seems that being called a hero is one of the hardest parts for you?

It’s extremely hard.  I think for the majority of officers, you don’t do the job for those moments, and you certainly don’t feel you’re a hero because you survived.  For me, the fact that I lived and my partner died, of course, there’s a part of me that feels I failed him.

Nobody in Seattle or on the force knows me outside my incident and that’s one of the hardest parts for me. I want people to know me for who I am, not as “that officer.”  But, every piece of our life shapes who we are and honestly, I’ve come to accept that Britt Sweeney is that officer.  I have learned that it’s okay.  It’s not going to be everything.